This section is about the
Muscles of Face and Neck 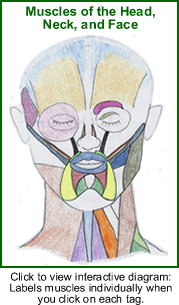 The scalenes (sing. scalenus) are muscles in the neck.

Occsionally, lists of four pairs of scalene muscles are given, in which case the four pairs are the above plus a pair of scalenus minimus muscles, which are also known as 'Sibson's muscle'. When present, this fourth pair of muscles is located behind ('posterior to') the lower part of the scalenus anterior.

Together the scalenes extend from the cervical vertebrae (i.e. the neck bones) down to the first and second ribs. They raise the first and second ribs during inspiration and they can bend the neck both forwards, and to each side. The following 3 tables include details of the points of origin and insertion and the actions of each of these pairs of muscles individually.

1. The points of origin and insertion, and the actions of the scalenus anterior muscle:

2. The points of origin and insertion, and the actions of the scalenus medius muscle:

3. The points of origin and insertion, and the actions of the scalenus posterior muscle:

The scalenes are muscles located in the region of the of the head, neck, or face taught as part of many courses in Indian Head Massage. As this is a popular therapy we have included several pages that may be of interest to students of Indian Head Massage. See, for example, the page about skeletal structures of the head and neck.

See the page about Facial Muscles to view the location of the scalenes muscles. (This page consists of an interactive, rather than just a labelled, diagram, so you'll have to test yourself by guessing which muscles are the scalenes until you find the correct label.)