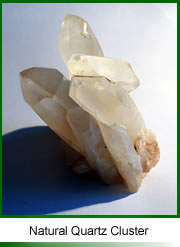 Clear quartz is a naturally occurring colourless gemstone that has a trigonal crystal structure because it is a form of quartz. Quartz is the common name for the crystal form of silicon dioxide whose chemical formula is SiO2.

Clear quartz is also known as "rock crystal". The term "crystal" is derived from the Greek word for ice because the Ancient Greeks believed tha clear quartz was permanently solidified water (i.e. ice).

Clear Quartz has many associations, including

In cases of bad news, negative thoughts, or desire for re-direction: Ask Angels to show you divine love in the world and be sensitive to their signs in reply.