Avastin and Lucentis equally effective for treating wet AMD, according to UK study 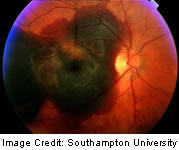 An anti-cancer drug has been proven to be equally as effective in treating the most common cause of blindness in older adults as a more expensive drug specifically formulated for this purpose. The results of a two-year trial, involving scientists from several institutions including Southampton University show that two drug treatments Lucentis and Avastin are equally effective in treating neovascular or wet age-related macular degeneration (wet AMD).

Lucentis, the drug most commonly used to treat wet AMD in the UK at the moment, costs about £700 per injection and Avastin costs about £60 per injection. The NHS could save £84.5 million annually based on injecting 17,295 eyes each year by switching from Lucentis to Avastin. Avastin is already used to treat wet AMD in some parts of the UK and extensively elsewhere in the world and also for other eye conditions. Over the past five years, a team of scientists and eye specialists from 23 hospitals and UK universities, including the Southampton University, Queen's University Belfast, Bristol University, Liverpool University and Oxford University, have investigated whether Lucentis and Avastin and the way they are given are equally effective and safe.

Out of the 610 patients with wet AMD that entered the trial known as IVAN, 47 were from Southampton General Hospital. This made Southampton one of the highest recruiting centres in the UK. IVAN is one of the largest ever carried out in the field of eye disease in the UK. In addition, DNA from all 610 participants has been stored in Southampton for future studies.

" This is a very important study which highlights that Avastin has similar effectiveness to Lucentis in the treatment of macular degeneration. Avastin is a much cheaper drug and as such if the NHS switched to Avastin cost savings of many millions of pounds would result."

The IVAN study's two year results indicate that sight was equally well preserved with either of the two drugs. Giving the treatment regularly every month, resulted in slightly better levels of sight detected by testing of near visual acuity and contrast sensitivity. The 'as needed' group received on average 13 injections over the two year period compared to 23 for the monthly treatment group. However, continuous treatment caused a higher proportion of eyes to develop a condition known as geographic atrophy which is a thinning of the retina and its blood supply.

" The IVAN results at the end of year two show that Lucentis and Avastin have similar functional effectiveness regardless of the drug received. With respect to monthly versus as needed treatment, while there was marginally better eyesight in the former, the development of atrophy is a matter of concern in the longer term."

" The findings of the IVAN study will be of great importance for the management of patients with wet AMD throughout the world. Research to improve patient care is a key aspect of the work of Belfast Trust, and we are committed to sponsoring and leading important clinical trials of this kind which allow our patients early access to new treatments."

" With increasing life expectancy and a growing proportion of older people in the population, slowing the progress of conditions like AMD is key to maintaining their independence. The IVAN trial is an example of research led from Northern Ireland with international significance - the findings have the potential to influence how AMD is managed in the future."

The IVAN study also monitored the drugs for serious adverse events which included death, heart attacks, strokes, and any other event that was life threatening, disabling or resulted in hospitalisation. These were similar for the two drugs. However, deaths occurred less frequently in the group that received monthly treatment, although there were fewer deaths overall among people taking part in the trial than were expected based on their age and gender and national death rates. When these safety results were combined with those of a similar study called the CATT trial which was performed in the USA, the resultant findings continued to indicate fewer deaths when treatment was given monthly.

The researchers believe that the results of their study will be useful at the next round of technology appraisals by the National Institute for Health and Care Excellence (NICE) and might even lead to changes to the way in which wet AMD is treated. In the immediate term, older people beginning a course of Lucentis or Avastin should be provided with information about the trade-off between the number of injections, and the chances of developing geographic atrophy and risk of mortality in two years.

Note that the conclusion that "Avastin and Lucentis equally effective for treating age-related macular degeneration" is not new. Exactly the same conclusion was reported by The U.S. National Institutes of Health (NIH) and featured on this website in April 2011.

News is included on the IvyRose website to inform visitors about current health issues, but not to endorse any particular view or activity. Any views expressed in this news item are not necessarily those of IvyRose Ltd.. Material in this item includes information released by the UK-based source listed below on 19 July 2013 and may have been edited (e.g. in style, length, and/or for ease of understanding). For further information, please visit their website.