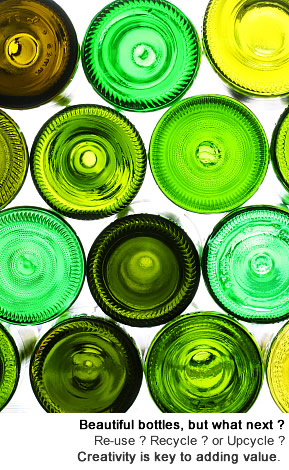 Recycling and Upcycling are trendy topics at the moment.

Recycling seems obvious - it's about re-using materials (or ideas, etc.) in a new way, right ?

It seems that more people in the UK are now recycling in some way or other than ever before. However, there are still rumours and stories circulating about waste that has been separated by households then (allegedly) being thrown into the same larger containers and disposed of altogether anyway - some say to landfill. Details, if any, vary from place to place but it seems likely that this has at least happened in the past even if it is not still happening in some areas in July 2011.

On the other hand, some successful recycling schemes have been running for many years and are not only genuine but also extremely effective e.g. some arrangements for recycling clean paper into other paper products, or for recycling drinks cans. There have certainly been many technical, logistical, political and economic challenges involved in developing efficient ways to recycle various types of used products and/or packaging so that the materials within them can eventually be put to another good use instead of being buried in the ground (or at sea) forever - where they may, or may not, decay anytime soon depending on the type of materials present. Of course it can be argued that with sufficient expenditure of time, effort, expertise, money, energy and goodwill most such problems can be solved and so ways found to recycle most items as cost- and energy-efficiently as possible. It is also reasonable to expect that some materials will be more easily and effectively recycled than others.

That is all very well but while many people are making "politically correct" easy-to-say statements about recycling, the whole subject can become increasingly bland, less interesting, and less innovative.

If recycling in general and at least some specific recycling schemes are imperfect, what about better options ?

What is the difference between recycling and upcycling ?

... at least, that's one interpretation of recycling vs. upcycling. There are probably many others.

Thoughts that spring immediately to mind include restoration and renovation. That is perhaps a "grey area" because upcycling isn't just about making an old item such as an item of antique furniture as beautiful and functional as it was in the past (classic restoration), but rather improving it in a slightly different, creative, or innovative way. That could mean turning it into something else while still retaining much of the original structure, or it could mean increasing its appeal in some specific way, e.g. making it look better for use in a particular space.

So, would re-painting furniture and re-covering an item with new fabrics be furniture restoration, renovation or upcycling? Perhaps that depends on the individual piece, its style, and the tradition of the craftsman or artist.

Upcycling: Does anyone really do that ?

Absolutely. As well as the discussion and comparison with restoration and renovation, consider recent TV series such as "Grand Designs" and "Kirstie's Homemade Home". There's often lots of upcycling going on there.

There are also some fantastic up-and-coming artists specializing in exactly this field of reclamation and improvement of items that might otherwise be discarded - effectively creating real value from items close to, if not already on, a scrap-heap.

Catri Barrett of Ethical Eco Art (based in Oxfordshire) explained:

" I have always been interested in the impact we, as humans, have on the natural world and like to explore this through my artwork. The huge problem of landfill and consumerism lead me to develop my upcycling technique. I get immense pleasure from observing someone's appreciation of my upcycled furniture, when they would never have given the piece a second glance, yet alone houseroom, in its original state."

That sounds inspiring and more innovative that just putting another used thing into the recycling box. We particularly love the memory box cupboard and banana wood bowl.

Seek joy and bask in the Angel blessings all around.