The many welcome indications of spring include increasing sights and sounds of birds in gardens, parks, hedgerows and woods. At this time of the year there are often interesting opportunities to watch various birds singing, feeding, collecting nesting materials and rearing their young. It is, of course, considerate to watch birds or other wildlife unobtrusively in order not to frighten them or otherwise intrude too much on their activities. Nesting and fledgeling birds in particular are usually best left alone (unless obviously injured or in danger).

In appreciation of garden birds, including well-known species such as sparrows, robins, tits, blackbirds and starlings, here is a simple sliding-block puzzle of a blackbird photographed in the south of England last year. (Press the button labelled "Shuffle" at the lower-left of the picture to re-arrange the sections randomly, then move one at a time to re-create the original picture. If it is too difficult just press the "Original" button to return to the complete image.) 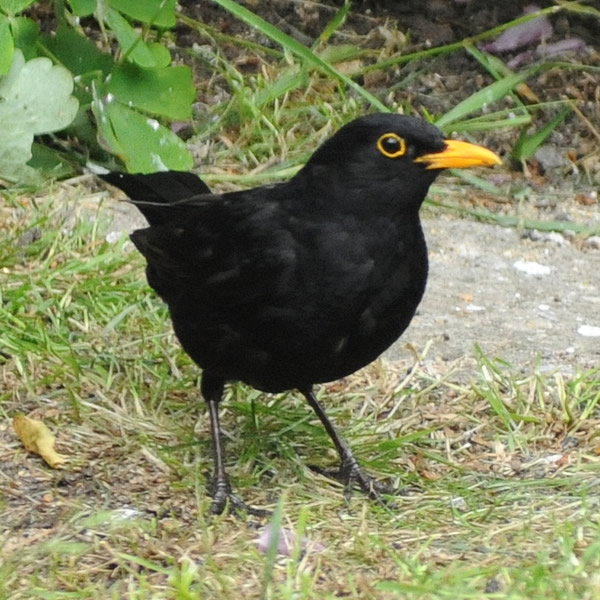 Male blackbirds such as the one shown in the photograph above are easily recognized by their size, colour and shape, especially the bright orange-yellow beak and eye-ring, which make adult male blackbirds so distinctive. Females and chicks are less easy to identify due to their paler colour, typically brown, sometimes with marking such as streaks on their breasts. Less commonly, there are also some albino blackbirds.

Blackbirds are one of the most common birds in Britain, where there is estimated to be over four million breeding pairs. They are predominately ground feeders who pull worms from the soil and peck at insects and berries near the base of garden shrubs, hedgerows and farmland. It is generally quite easy to encourage blackbirds to visit suburban gardens as many return regularly to reliable sources of food. Some of the birdfoods that attract blackbirds include mealworms (live or dried) and special mixes labelled as suitable for blackbirds.