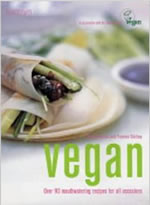 A new cookbook by a fat vegan cook from Great Britain and his nutritionist wife proves how healthy and delicious it can be to be kinder to the planet and your tastebuds.

It's now 60 years since Donald Watson first urged people to think logically about human health, unnecessary cruelty to animals and the plight of the environment: He set up The Vegan Society and invented the word 'Vegan' in November 1944 and is a fit 95 this year.

60 years later people are beginning to listen: an international conference in Sweden warned our hunger for meat will mean we'll run out of water. The world health organisation and the NHS warn if we don't start eating more fruit and vegetables people dying from preventable diseases will reach epidemic proportions.

Environmental protection agencies are distraught at the rate that the rain forest (the lungs of our planet) are being burnt and chopped down to grow soya - not to feed people but to feed to beef cattle.

People are starving because countries such as the USA feed 95% of their soya to animals instead of people.

Whilst working at The Vegetarian Society award winning fat vegan cook Tony Weston met Yvonne Bishop, director of 'Cranks,' the 'Health and Vitality' vegetarian restaurant chain that started in London's trendy Carnaby Street in 1961 (frequented by the Beatles and other 60's celebrities)

They got married in The Vegan Society's Diamond Jubilee year and became
Mr and Mrs Bishop-Weston in a garden in the New Forest, Hampshire complete with vegan caviar, vegan champagne, a vegan chocolate fountain and a dairy and wheat free wedding cake.

" We couldn't think of a better way to celebrate ! " said Tony.

They also combined Tony's culinary skills and Yvonne's expertise as a certified Nutritionist
(clinics in London and Surrey) to write a "delicious and nutritious" cookbook called simply 'Vegan.'

Perfect Timing: " Our timing couldn't have been better," said Yvonne.

There has been a huge backlash by the meat and dairy industries spending millions of pounds to encourage people to eat more meat and dairy, and then there was Dr Atkins, but it seems all this has only inspired people to examine the solutions that eating more fruit and vegetables, nuts and seeds, has to offer.

" What they are discovering is that veganism's far easier than they thought, it's delicious, it can be nutritious and it makes a huge difference to humans, animals and the environment."

Recipes from the innovative new cookbook have been highly acclaimed by the press and have even been used by the BBC on a new recipe section http://www.bbc.co.uk/food.

Published by Hamlyn the book has even cracked the tough, competitive US market and is selling worldwide on Amazon and in Borders bookshops.

"You are streets ahead of us in the states," said Tony "Ford and Toyota even make vegan cars over there, so we are delighted that a humble but innovative UK vegan cook book is doing so well against all odds."

Information by Tony Bishop-Weston of "Foods for Life".
See http://www.foodsforlife.org.uk.