Most tourists to northern Spain concentrate on the beaches, bars, and hotel swimming pools. Others immerse themselves in the food, wine, architecture, and café society of Barcelona, but why not experience even more ?

"Holistic Holidays" don't have to involve reiki, meditation, and personal development workshops. We found relaxation in the sea one day, and the roots of classical medicine the next!

The ruins of the ancient city of Empuries lies just a few minutes' drive inland from Spain's Costa Brava coast. Among the remains of this classical civilisation stands a larger-than-life statue of Asclepius, the popular, dedicated and successful physician of around 1200 B.C. In fact, Asclepius was so renowned that Homer names him as the physician to King Menelaus in his epic "The Iliad" (c. 750 -700 B.C.).

Long before modern pharmaceuticals, X-rays, or chemotherapy, Asclepius and men using similar techniques in the same tradition developed the practice of medicine and healing across southern Europe.

Asclepius is believed to have been a popular and successful physician at around 1200 B.C. and is thought to have been associated with the school of Thoth on the island of Ionia.

Not only is the historical Asclepius mentioned in Homer's "The Iliad", but two of the sons of Asclepius, Podaleirius and Machaon are also mentioned as physicians in the Greek army and active in the siege of Troy. These sons of Asclepius are said to have passed on their secrets for healing to their descendents who continued in the profession, becoming and establishing the Asclepiadae, a large order of priest physicians.

There were two kinds of priest physicians (Asclepiads) some lived and practised in the temples and others lived amongst their patients in the communities. Both studied the sciences of mathematics, astrology, astronomy, language and the psychology of religious rituals.

The cult of Asclepius was popular and the "temple incubation ritual' took place in the dormitories within the Temple buildings (Asclepions). Patients were required to sleep in a dormitory at night, during which time Asclepian snakes would be free to wander over the bodies of patients when it is said that a symbolic death and rebirth would take place. It was also expected that while asleep the patient would be visited by the god in a dream. The Asclepiads (priests) would then interpret the dream, consider the patient's diet, purification practices and finally provide medicinal treatment. The use of ritual might have involved the use of hypnosis, music, magnet healing, spiritual incantations and psychological counselling as a means of focusing energies to return the (whole) patient to a state of 'harmony'.
Patients visited the shrines of Asclepius hoping to find cures for their illnesses.

There were many centres and schools of medicine at that time. These were located throughout the Mediterranean, from Trikkis in Thessaly, to the island of Cos.

In his biography Hippocrates, (recognised by many as "the father of modern medicine") traced his family lineage to this same Asclepius.

Medical Symbolism and the Statue of Asclepius 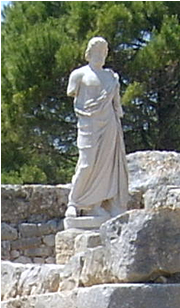 One of the most interesting insights to be gained from exploration of the ruins of Empuries is the symbolism that has remained in constant use and similar meaning throughout the centuries. Today we seldom consider the origin and meaning of some of the best-known symbols of medicine, such as the serpents twisting around a staff. Perhaps that is our loss.

The damaged statue of Asclepius (illustrated), was discovered in 1909 inside one of the compartments of the large cistern located in front of the temple to Asclepius. The statue on the site at Empuries today is a copy of the original  which is displayed in the Museu d'Arqueologia de Catalunya in Barcelona. The original statue is made of two different Marbles, one from the island of Paros and the other from Attican Pentelic quarries. The statue is of Asclepius wearing sandals and a robe which is draped across his body leaving his chest mainly uncoverd In his left hand rests on a simple staff which consists of a roughly-hewn branch of a tree around which is entwined a single, sacred snake. (The serpant is said to symbolize the renewal of youth as it casts off its skin.)

The Staff of Asclepius

The staff represented in this statue has been used as a symbol of medicine from the early 16th century onwards, and is still used by professional and patient centred organisations around the world (such as the World Health Organisation, http://www.who.int). It is also incorporated in the coat

A Sumerian vase, dated around 2000 B.C. depicts Ningishita with such a staff. The staff of Hermes has two snakes entwined around a staff and is mainly used by Commercial medical or pharmaceutical organisations.

More about the snakes

Infection by parasitic worms was a common affliction in ancient times. Such filial worms (Dracunculus medinensis aka "the firey serpent," aka "the dragon of Medina" aka "the guinea worm") crawled under the skin and around the body of the patient. The Asclepian staff might be associated with those used by physicians of that age who would locate the worm, slit the skin in front of the worm's path and twine it round a stick as it comes out from underneath the patient's skin. It is believed that physicians carried such a staff to advertise their work.

'Asclepian snakes', as used in the temples, are described as smooth, glossy and slender and have a brown back with a streak of darker brown behind the eyes, and belongs to the family of snakes called 'Colubridae'(classed as 'Elaphe longissima).

The Romans (later defended the Greeks at Empuries) accepted and continued to use the Asclepian healing methods and took snakes with them as they colonised Austria and Germany. Snakes which escaped continue survive and flourish in these
areas.