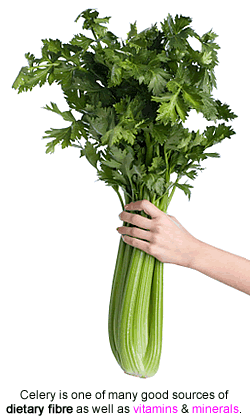 Although dietary fibre or 'dietary fiber' is now widely used in health and nutritional contexts, the word 'roughage', also used in colloquial speech and in older textbooks, has the same meaning.

What is Dietary Fibre ?

Dietary fibre is the indigestible parts of plant materials.

There are two types (or 'components' i.e. 'parts') of dietary fibre:

Recall from study of digestion that indigestible materials eventually amass in the lower sections of the large intestine forming faeces which are eliminated from the body by defecation.

Additional benefits of dietary fibre include:

High fibre foods such as wholegrain breads, potatoes, fruit and vegetables increase the bulk of stools (faeces) by approx. 5g per every 1g of fibre. This is due to water absorbed by the fibre and matter that binds to it in the gut.