Following the failure of the early investigators into visual perception of simple two-dimensional shapes to reach conclusions consistent with each other, and to explain their findings systematically, experiments of the same form were still being undertaken many years after Helson and Fehrer’s account of the rôle of form in perception.
See for example, work by Blackwell, Casperson, and Aulhorn.

In 1978 Johnson, Keltner & Balestrery investigated the effects of target size and eccentricity on visual detection and resolution. The resulting paper (see Ref. below) is among the most frequently cited of all the papers in this field. The Tübingen perimeter* was used to investigate the ‘functional characteristics of peripheral vision’. 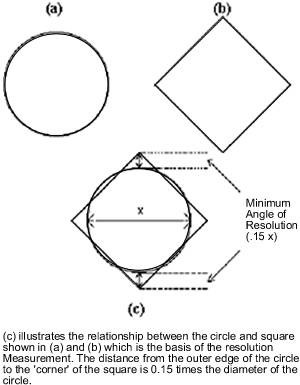 This method of measuring the visual acuity necessary for distinguishing between two objects is related to Aulhorn’s earlier approaches to the same problem. It can be shown that if squares of the same size are used to compare Johnson et.al.’s method (using an appropriate circle - smaller than the square) with Aulhorn’s form criterion approach which depended on the diameter of the small circle which just fitted into one corner of the square, touching the two edges of the square and its inscribed circle, then the resulting measurements differ by only 6%. However, Johnson et.al.’s method has the advantage of using a function of the actual shapes presented in the experiments, rather than the more abstract constructs employed by Aulhorn.

Johnson et.al.’s experimental method involved presenting a random sequence of six circle and square targets of fixed size, to observers. The observers reported which target had been shown on each trial, and guessed when they could not tell fr sure. The luminance of the targets was varied until the observer could consistently discriminate at least five out of six targets (83% correct).

Johnson’s results indicated that detection sensitivity is greater for larger targets than for smaller ones and that target size and eccentricity have a greater effect on resolution thresholds than on detection thresholds, even at the fovea.

Generally, the results obtained were consistent with previous studies.