Following the failure of the early investigators into visual perception if simple two-dimensional shapes to reach conclusions consistent with each other, and to explain their findings systematically, experiments of the same form were still being undertaken twenty years after Helson and Fehrer’s account of the rôle of form in perception.

Casperson’s experiment, conducted in 1950, developed the work of Helson and Fehrer, Wilcox, and others, by determining the discrimination thresholds of six different geometric forms (an ellipse, a rectangle, triangle, diamond, cross and star) and by relating their relative discriminability to three quantifiable aspects of their construction.

The three aspects were maximum dimension and perimeter (five figures were used for each area investigated) and, in each case, seven different areas. 30 different stimulus figures were used. These included ellipses, rectangles, triangles, diamonds, crosses and stars (as below): 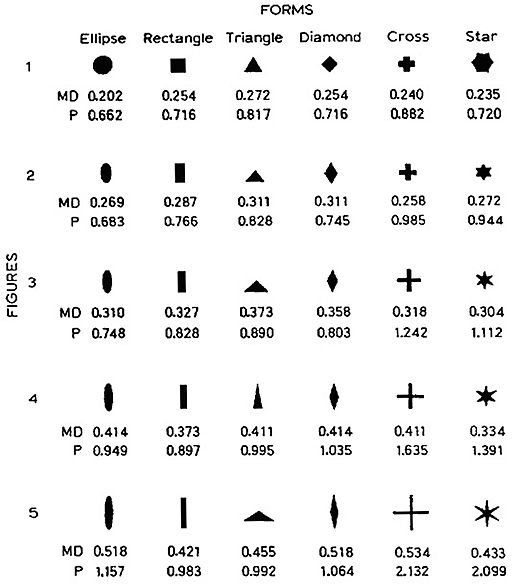 Casperson used 20 (male) observers, spanning an age range of 18 to 27 years. Each observer had seven experimental sessions, in each of which he judged a complete set of 30 figures, for a particular area, 24 times. The sessions lasted from one to two hours depending on the size of the figures and the speed with which the subject responded. As is usual in experiments of this type, Casperson states that “No knowledge of results was permitted and no learning was apparent other than familiarization with the procedure”. The probability of recognition (‘percentage of correct reports’) was calculated using a formula designed to correct for chance errors according to the data collected, rather than by assuming that if the observer could not correctly identify a shape, he responded with any of the five possible incorrect answers with equal probability. The formula used was:

Although the functions of ‘probability of correct response’ against each of the aspects of shape investigated were included in his paper, Casperson was most interested in identifying ‘that variable which produces discrimination functions that are alike for all of the figures’. None of the variables investigated produced identical discrimination functions for all figures but the question of which variable was the best was considered at length. However, Casperson’s results were specific to a particular shape or shapes.

Overall, the results suggested that the Gestalt principle of ‘simplicity' was inadequate for predicting the relative discriminability of the ellipses, rectangles, triangles, diamonds, crosses, and stars used in Casperson's Experiment. It was found that: