Following the failure of the early investigators into visual perception of simple two-dimensional shapes to reach conclusions consistent with each other, and to explain their findings systematically, experiments of the same form were still being undertaken twenty years after Helson and Fehrerâs account of the rÃ´le of form in perception. See for example, work by Blackwell, Casperson, and Aulhorn.

In 1972 Barnard's work exploring the possibility of a new image evaluation method based on target recognition statistics was reported. This investigation was conducted at a time when the images generated were produced on photographic film, rather than on cathode ray tube (CRT) monitors, as was usual in the 1980s and 1990s, or LCD displays which have only been a technical and widely affordable option since about 2000.

Barnard summarised the purpose of his study:

â The selection of an image evaluation method has several important consequences. It establishes a basis for measuring the performance of imaging systems, and it implicitly defines criteria for the optimal design of such systems. Since the image evaluation method influences design, it must be properly matched to the intended system utilization which usually involves the conveyance of visual information to human observers.â

That is, his work was conducted as part of "human factors" research to develop improved human interfaces for engineering systems - rather than primarily to improve understanding of human physiology.

Barnardâs study was based on experiments in which arrays of simple shapes - including, for example, the Landolt Ring and a figure with five âlegsâ 60 degrees apart, were presented to observers. In each case the target symbols were positioned at random orientations and arranged so that the size of the symbols decreased down the page.

Examples are shown below: 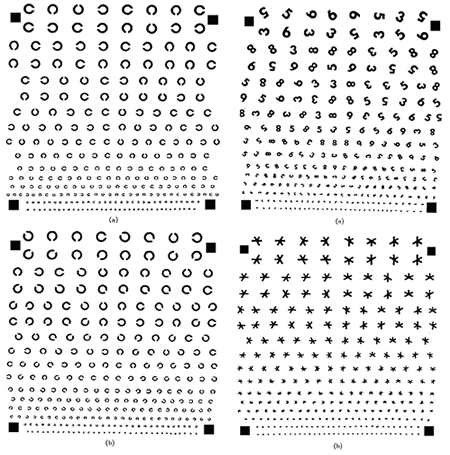 The method used for these experiments differed from the earlier and many subsequent works because in this case the observers arranged their viewing conditions, such as viewing distance and duration, with complete freedom. It was noted that the observers participating in this experiment consistently performed better than they expected. This observation was taken to indicate that people extract and use information of which they are not consciously aware.

Barnard analysed his results by plotting curves of probability of correct specification of Landolt Ring orientation, orientation of missing spoke and recognition of numerals, against the reciprocal of target size. This assumption that probabilities, rather than absolute thresholds, should be analysed when studying human perception is also noteworthy.