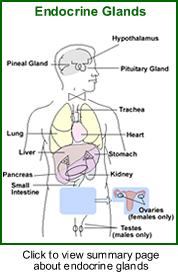 The pancreas is an important compound gland of the human body.

Hormones secreted by the pancreas acting as an endocrine gland:

Enzymes secreted by the pancreas acting as an exocrine gland:

For a diagram indicating the locations within the body of each of the endocrine glands, see Endocrine Glands of the Human Body.

This may be of interest to students of courses in massage, reflexology, beauty therapies, and other first-level therapy or other health-related courses.