This section is about

Bones of the head and neck.

To read about other bones of the head and neck, use the links on the left-side of this page. 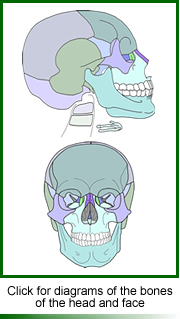 The mastoid process is a feature on (that is, a distinctive part of) the mastoid portion of the temporal bone.

Where are the temporal bones ?

There are two temporal bones in a normal complete adult skeleton. They are situated on each side of the (right- and left-) sides of the skull, below the parietal bones and above and behind the ears.

Where on the temporal bones are the mastoid processes located, and what do they look like ?

As stated on the page about markings and features on bones, a 'process' on a bone is a "raised area or projection". The mastoid process is a conical prominence projecting from the undersurface of the mastoid portion of the temporal bone, as described more fully below. Note that it is only possible to see this feature when looking at the bone - not when looking at the outside of the complete head while it is still covered with skin and, typically, head hair. 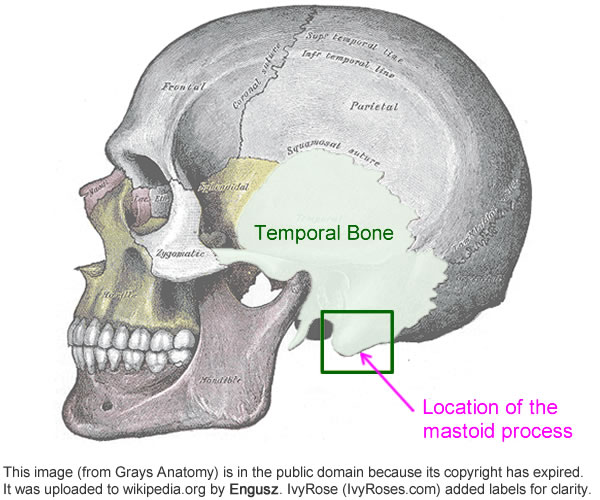 Functions (uses) of the mastoid processes

These processes serve as points of attachment for muscles, including the:

Each mastoid process has several grooves or 'fossae' (pl., sing form = fossa). They include the:

* Much of the information on this page is from Gray's Anatomy (1974 Ed., first Pub. 1901), which uses old and in some cases now less used anatomical terms, such as muscle names. Where indicated, modern equivalents have been used here for ease of understanding.

More about Bones and the Skeletal System:

This website includes many pages about bones and the skeletal system. The following pages may be of interest. These also link to further pages about related topics such as specific types of fractures, bone diseases and so on.

For further information see also our pages of books about orthopaedics.