Study indicates the extent of physical inactivity disparities in England 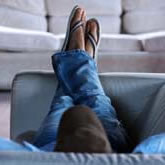 The results of a recent study involving experts at Bristol University (England) has revealed the extent of physical inactivity among adults across England. According to this research, England may be heading towards considerable future health problems and costs due to many people being physically inactive.

The study, which examined data on over one million adults in England from the Active People Surveys (APS), revealed that almost 80% of the adult population do even reach the national physical activity government targets. It also revealed disparities between activity with e.g. socioeconomic status.

Some statistics from the study include:

The research results also included evidence of a direct correlation between an individual's education, household income, local area deprivation and level of physical activity. Those in higher socioeconomic situations had higher levels of physical activity and adults who had degrees were found to have only a 12% chance of being physically inactive, while those without any qualifications were three times as likely to be physically inactive.

Physical inactivity was found to be significantly related to local-area deprivation with local authorities that have a greater number of sports facilities and higher rates of new expenditure, the less likely individuals were to be physically inactive. Finally, the findings show the impact of warm weather in England promotes overall physical activity.

" Physical inactivity is the most important modifiable health behaviour for chronic disease so knowing who is physically inactive is important for designing cost-effective policy interventions. These findings show physical inactivity in England has a large socioeconomic gradient with clear evidence of independent disparities by gender, ethnic group, age, geographic area and socioeconomic position.
_ They suggest that financial as well as cultural barriers need to be overcome to reduce the prevalence of physical inactivity."

Health News is included on the IvyRose website to inform visitors about current health issues and research, but not to endorse any particular view or activity. Any views expressed in the article above are not necessarily those of IvyRose Ltd.. Material in this news item was released by the source indicated below on 01 August 2013 and may have been edited (e.g. in style, length, and/or for ease of understanding by our international readers) for inclusion here. For further information, please visit their website.

How to encourage children to more physical activity - 6 Jul '11