A recent survey of pet dogs in England, Scotland and Wales has provided indications of a much higher risk of Lyme disease than previously thought. The research study at Bristol University (England, UK) used pet dogs as 'sentinels' for human disease risk. 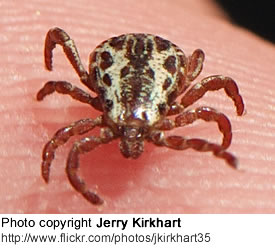 Transmitted by ticks, Lyme disease is a debilitating chronic infection which affects a number of animals including humans and dogs. It is caused by the bacterium Borrelia burgdorferi.

Clinical signs of Lyme disease in humans include a characteristic circular red rash that spreads from the site of the tick bite, followed by a flu-like condition. In dogs, the symptoms can be much more vague and difficult to diagnose. If untreated, the disease progresses to neurological problems and arthritis; chronic forms of the disease can last for many years.

To find out more about prevalence of infected ticks, Faith Smith of Bristol's School of Biological Sciences and colleagues recruited vets across England, Scotland and Wales to examine dogs selected at random as they visited veterinary practices. Since pet dogs largely share the same environment and visit the same outdoor areas as their owners, exposure to infected ticks in dogs is likely to provide an index for corresponding risks to humans.

Of 3,534 dogs inspected between March and October 2009, 14.9% had ticks. Of the samples that could be tested, 17 were positive for the Borrelia bacteria. Hence, 2.3% of ticks were infected. Therefore, the prevalence of infected ticks on dogs is 0.5%, or 481 infected ticks per 100,000 dogs. This suggests that the prevalence of Borrelia in the UK tick population is considerably higher than previously thought.

" Lyme disease appears to be a rapidly growing problem in the UK with important health and economic impacts in terms of loss of working hours and potential decrease in tourism to tick hotspots.

_ Without considerably better surveillance and routine diagnostic testing, Lyme disease is only likely to become more prevalent. In particular, future warmer winters might well extend the period over which ticks are active seasonally, while growing wild reservoir host populations, such as deer, will allow the tick population to expand."

This study is published in the journal Comparative Immunology, Microbiology and Infectious Diseases.
The research was funded by the Natural Environment Research Council (NERC) and Merial Animal Health Ltd.

Health News is included on the IvyRose website to inform visitors about current health issues and research, but not to endorse any particular view or activity. Any views expressed in the article above are not necessarily those of IvyRose Ltd.. Material in this news item was released by the source indicated below on 25 January 2012 and may have been edited (e.g. in style, length, and/or for ease of understanding by our international readers) for inclusion here. For further information, please visit their website.