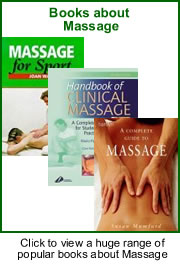 Plucking is a percussion (also known as tapotement) movement.

During the plucking movement, the therapist's fingers are outstretched and tissue is picked-up between the massage therapist's thumb and fingers by the thumb closing onto the fingers (a movement that may resembe the action of birds' beaks opening and closing). Both hands are used to quickly but briefly lift tissue in this way. The hands are normally used alternately and in rapid succession. The tissue is released after it has been lifted briefly using this light movement, in which the tissue is not gripped too hard. No marks should remain from from these quick "tissue lifts".

The rate of a plucking movement may vary according to where on the body it is applied, the client, and the purpose of the treatment.

This massage technique (movement) is generally applicable to the fleshy parts of the body only, so: