The cytoskeleton of a cell is a complex network of inter-connected protein filaments that form a scaffold-like framework as shown below. It helps to hold in place the structures within the cell e.g. organelles, as well as helping with the movement of certain cellular components and supporting and maintaining the shape of the cell - see cytoskeleton functions for further details.

This diagram of the cytoskeleton of a cell is a simple representation of the way the microtubules and microfilaments of the cytoskeleton form a three-dimensional network that extends throughout the cytoplasm within the cell membrane. This cytoskeleton diagram includes examples of some organelles within the cytoplasm structure, a mitochondrion and part of the rough endoplasmic reticulum are shown. (Intermediate filaments are not shown in diagram but are described below it.) 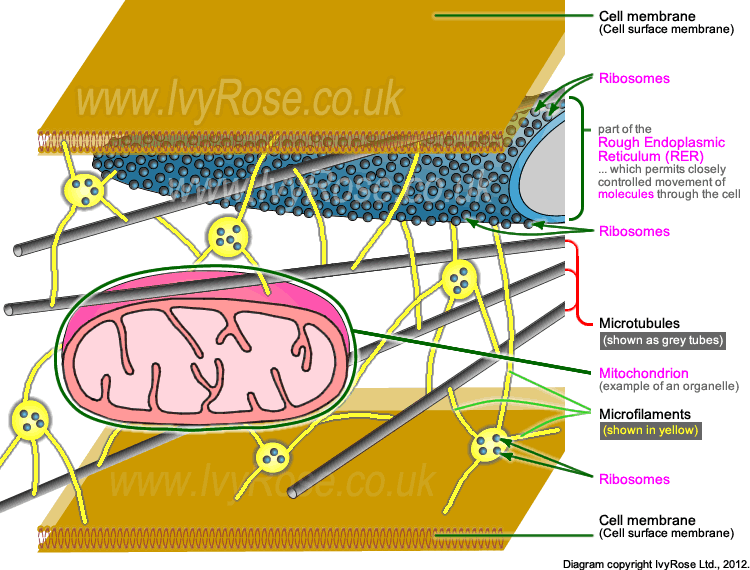 Structure of the Cytoskeleton

Notes about these parts of the cytoskeleton:

Some of the parts of the cytoskeleton described above are also mentioned elsewhere on this website e.g. plant cell structure, functions of microtubules and list the functions of cell organelles. Use the search box below to find more related pages.

Select the most beautiful flowers to contemplate while offering thanks to your Angels. (Another way to lift the spirit.)