Biological cells are the basic units of life i.e. the smallest units that can be alive.

There are many types of biological cells.

Biological taxonomy is the identification and naming of species and the arrangement of them into biological classes (i.e. groups). A taxonomic rank is a level in a taxonomic hierarchy, of which 'kingdom' is one of the highest ranks - its exact position in the taxonomic hierarchy depends on the system used. The Five-Kingdom system of biological classification proposed by Robert Whittaker in 1969 is based mainly on differences in nutrition and groups life forms:

Above: The Five-Kingdom System of Biological Classification 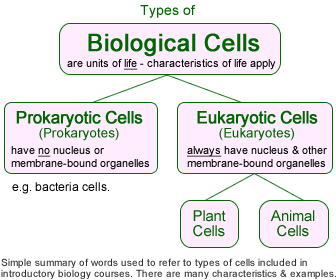 Some school biology courses e.g. UK A-Level (AS and A2) include the structures of:

The biggest difference between these is that unlike eukaryotic cells, prokaryotic cells do not have a cell nucleus or any membrane-bound organelles such as mitochondria. Instead, all of the contents of the cell is openly accessible within the same volume e.g. ribosomes are scattered throughout the cytoplasm (not attached to the surfaces of the endoplasmic reticulum as in animal cells).

Note: The numbers on the left are just for ease of reference to this table re. plant, animal and bacteria cells. The above is not a detailed comparison of these different types of biological cells but includes key differences in their contents at approx. the level of detail required for A-Level Biology.