Functions of Microtubules in Cells

See below for further information ...

Re-cap: What are microtubules ?

Microtubules are present in eukaryotic cells, including

Microtubules are long thin structures that consist of the protein tubulin and typically have a diameter of about 25 nm. Characteristics of microtubules that are important for their functions include: 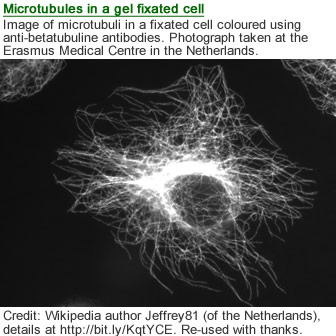 More about the structure of microtubules

1. Microtubules are an important part of the cytoskeleton of cells

Electron microscopy has revealed that cells contain a network of interconnected fibres and filaments that can be observed as thread-like structures when viewed using an electron microscope or fluorescence microscope (tagged with antibodies and fluorescent dyes). This network is called the cytoskeleton. It extends throughout the cell and connects with the cell membrane and organelles.

2. Role of microtubules during the prophase stage of mitosis

The two diagrams below illustrate the prophase stage of mitosis in which the following occurs:


The mitotic spindle is formed during prophase and remains within the dividing cell, an important part of its structure, through metaphase and anaphase until it finally breaks-up when the two new cells separate during telophase. See diagrams of mitosis.

Remember : A microtubule is found inside some cells but is not a (type of ) cell.

For more about cells: the structure of a plant cell, the structure of an animal cell & comparison of plant, animal and bacterial cells. See also very simple information about chloroplasts and photosynthesis (via 3 short YouTube videos).