Teeth (as part of the Digestive System) 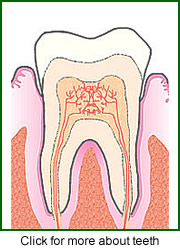 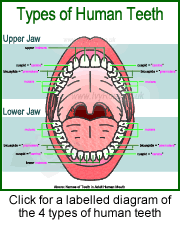 Teeth (sometimes called 'dentes') are accessory organs of the human digestive system. They are located in the buccal cavity, which is also known as the oral cavity and as the mouth. There are normally four types of teeth in an adult human mouth.

1.0 The Functions of Teeth

Teeth are the organs of chewing, which is also known as mastication.

Teeth cut, tear and grind food in the mouth, enabling it to be mixed with saliva (from the salivary glands) effectively and therefore swallowed more easily.

The actions performed by the teeth are all mechanical - as opposed to chemical.

How do the functions of teeth contribute to the process of digestion ?

The actions of the teeth (incl. cutting, tearing and grinding) increase the surface area of the food in the mouth. This enables the digestive enzymes greater access to the food material and so assists their role in the digestive process.

What aspects /features of the teeth lead to their effectiveness ?

Humans usually develop two sets of teeth over a lifetime - so we are 'diphyodonts'.

A child's first set of teeth is referred to by many different names, including:

This first set of teeth usually starts to erupt about six months after birth - although some babies are born with one or more visible teeth, which are called neonatal teeth. The process of milk teeth emerging through the gums can be painful. Milk teeth start to be replaced by adult teeth (also called permanent teeth) from the age of about 6 years. Most people have an almost-complete set of adult teeth by the age of about 12 years. The last of the adult teeth to emerge are the wisdom teeth, which can take a few more years to appear - usually between the ages of about 17 and 21.

Note that the ages mentioned above are all approximate. It has been known for some people to retain one or two "milk teeth" late into adulthood, although this is rare. Likewise "adult teeth" can appear relatively early or relatively late in some individual cases.

3.0 Teeth in other animals

Different animals develop different numbers of sets of teeth over their lifetime.
They can be classified as:

The shape of an animal's teeth are generally suited to its natural diet. Although many animals (including humans) have several different types of teeth within each set of teeth, the range of types of teeth, their shape(s) and the proportions of each type of tooth an animal has depends on the type of food its species has developed to eat. 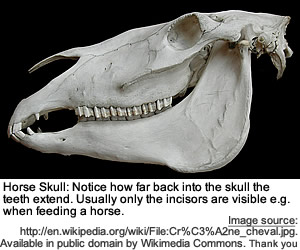 Many forms of vegetation such as leaves and stalks are fibrous and relatively difficult to digest so plant-eating animals (called herbivores) tend to have have many molars for chewing and grinding e.g. horses have 12 premolars and 12 molars, see left. In contrast, some meat-eating animals (called carnivores) use their teeth to catch and kill prey and may need teeth to tear flesh before chewing and grinding it. The use dogs make of their different types of teeth is an interesting example. They use incisors to nibble meat from bones and for grooming. Their canine teeth, sometimes called 'fangs', are used by wild dogs and wolves to grab and rip their prey. The premolars on either side of dogs' upper and lower jaws are shearing teeth used in the wild to rip chunks of flesh from prey, and their molars are the crushing teeth used in the wild to crack bones and by domestic dogs to crunch biscuits. Another example of animal teeth suited to their diet is that of snakes' teeth that curve backwards, i.e. angled toward the throat, and act as hooks to preventing live prey from wiggling loose.

Replacing whole teeth when they wear out or continuously growing teeth as they wear - so they don't wear out ...

In the cases of some animals, their teeth are not replaced by a new set of teeth but, instead, individual teeth grow continually, compensating for the wear that they are subjected to by constant use. For example, the incisor teeth of some rodents e.g. beavers grow continuously at about the same rate that they are worn down by use - hence they maintain a similar length throughout the adult life of the animal. Some rodents such as guinea pigs and rabbits have continuously growing molar teeth as well as continuously growing incisors.