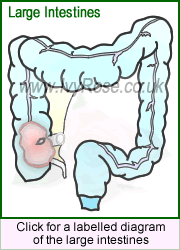 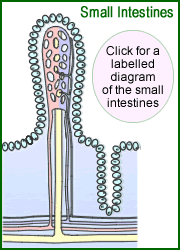 Knowledge of the the large intestine is required for introductory courses in anatomy & physiology, human biology, and zoology. This simple description of the large intestine is useful for school pupils, A-Level Human Biology, and ITEC Anatomy & Physiology students. It may also be helpful to students of other health science subjects such as nursing, diet and nutrition and similar. This follows the pages about the small intestine.

The large intestine is part of the digestive system and is located in the lower area of the abdomen within the large membrane known as the peritoneum (which has 2 layers separated by a small amount of liquid, enabling the organs contained within it to move freely over and around each other). The large intestines begin at the bottom of the abdomen, where material is received from the ileum, which is the final part of the small intestine.

Simple Diagram of the Large Intestine (main structures and flow only)

This diagram is interactive - click on a text label (indicated in green) for more information about that topic, on another page.

The large intestine is one of the organs in the human body.

Depending on the level of study, students may be expected to have more detailed knowledge of how the large intestine works.

See also the small intestine and a more detailed diagram of the large intestine.