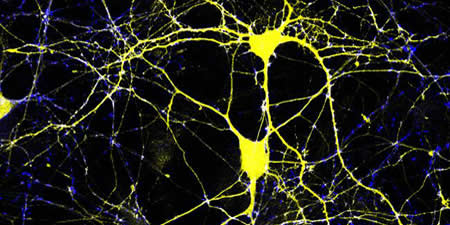 Recent research has revealed that a protein produced by a gene identified in fruitflies, is responsible for communication between nerve cells in the brain.

The gene dubbed the "stoned gene" was first discovered in fruit flies in the 1970s. When this gene was mutated, the fruit flies had problems walking and flying, which lead to the expression 'stoned' gene. Some years later the same gene was also found in mammals. Until recently scientists have not known precisely what the gene is responsible for and why it causes problems with physical functions when it mutates.

Scientists at Liverpool University have recently reported research indicating that the protein the gene expresses in mammals, called stonin2 (note: stonin2 is not the name of the gene, but is the name of the protein expressed by the 'stoned' gene), is responsible for retrieving 'packets' of chemicals that nerve cells in the brain release in order to communicate with each other. The inability of the gene to express this protein in the fruitfly study, suggests why the insect appeared not to be able to walk or fly normally.

The team used advanced techniques to inactivate stonin2 for short and long periods of time in cells grown in the laboratory. The cells used where from an area of the brain associated with learning and memory. They showed that without stonin2 the nerve cells could not retrieve the 'packets' needed to transport the chemicals required for communications between nerve cells.

" Nerve cells in the brain communicate by releasing 'packets' of chemicals. These 'packets' must be retrieved and refilled with chemicals so that they can be used once again. This recycling programme is very important for nerve cells to keep communicating with each other.
_ We have shown that a protein called stonin 2 is needed for the packets to be retrieved. There is currently no evidence to suggest that the gene which expresses this protein is mutated in human disease, but any failure in its function would be disastrous. The research is another step towards fully understanding the complexities of the human brain."

News is included on the IvyRose website to inform visitors about current health issues, but not to endorse any particular product, view or activity. Any views expressed above are not necessarily those of IvyRose Ltd.. Material in this news item was released on 05 July 2012 and may have been edited (e.g. in style, length, and/or for ease of understanding). For further information, please visit their website.