Research into genetic causes of schizophrenia within families 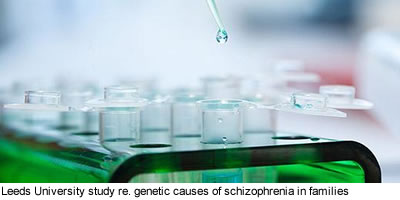 Leeds University scientists are working towards identifying the genetic defects involved in the development of schizophrenia within families.

Schizophrenia is a common yet poorly understood condition believed to be caused, in part, by genetic mutations. The two year project at Leeds University extends previous research there that suggested the possibility of a genetic mutation, perhaps causing an inherited form of the illness.

" If we can confirm which specific genes and processes are at fault, we can start to develop new treatments to target them," said lead researcher Dr Steve Clapcote from the University's Faculty of Biological Sciences.
" Our study is important because medicines currently used to treat schizophrenia aren't effective in about a third of patients and can also cause severe side effects," he added.

The team are keen to work with families from the Pakistani community of West Yorkshire, most of whom are the children of settlers from the 1950s.

" We tend to find a smaller range of genetic mutations when individuals marry within a close-knit community, but it also means that we see certain mutations more often," said Professor Inglehearn.

The researchers believe that this new approach will allow them to narrow the search to uncover which mutated genes have been inherited and might cause the development of the illness.

" In recent genetic studies of schizophrenia, researchers have usually studied large groups of unrelated people, looking for small increases in disease risk in a broad range of genes," said Dr Clapcote.
" This new research uses a simpler approach, by working with a much smaller group of related patients," he explained.

The researchers have already tried this approach in one family, resulting in evidence of the presence and location of a mutation on chromosome 13 which may cause a 'simple' genetic form of schizophrenia. They found that a child who inherits two copies of this mutation - usually from consanguineous marriage (marriage between cousins) - is more likely to develop the illness.

Previous research had suggested the existence of such a gene, but with vague and varied suggestions as to its exact location. Dr Clapcote believes that the team's preliminary work should make it easier to confirm and locate the gene involved. If successful, they plan to apply the new gene discovery approach to other families with multiple cases of schizophrenia. The identified genes may include suitable targets for new drugs, which the team is hopeful will treat the causes of the disease, not just the symptoms, and with fewer side effects.


News is included on the IvyRose website to inform visitors about current health issues and research, but not to endorse any particular view or activity. Any views expressed in the article above are not necessarily those of IvyRose Ltd.. Material in this news item was released by the source listed below on 17 January 2012 and may have been edited (e.g. in style, length, and/or for ease of understanding by our international readers) for inclusion here. For further information, please visit the website whose link follows below.