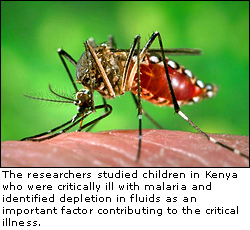 The lives of hundreds of thousands of African children who die each year from severe malaria could be saved by a relatively simple intervention that has been developed by doctors working in London and Kenya.

The new treatment - developed in an eight-year collaborative study by paediatricians at Imperial College London and the Kenya Medical Research Institute (KEMRI) - Wellcome Trust Research Programme in Kilifi, Kenya - is based on fluid replacement for critically ill children with malaria. If this were used in hospitals throughout Africa, the research team believes that as many as 80% of the deaths caused by severe malaria could be prevented. This would be a major breakthrough in treating one of the most devastating illnesses in Africa.

Using intensive care methods, the researchers from Imperial College and the KEMRI-Wellcome Trust Research Programme studied critically ill children in Kenya and identified depletion in fluids as an important factor contributing to the critical illness.

One major question was how the shortage of fluid should be treated. In view of the conventional medical wisdom that children with severe malaria have brain swelling, which might be aggravated by administering additional fluids, treatment has in the past involved fluid restriction.

Dr Kathryn Maitland from Imperial's department of Paediatrics, who leads researchers at the KEMRI Centre in Kilifi, working together with Professor Michael Levin from the same department, postulated that fluids could be replaced safely without risk of brain swelling if albumin (a molecule that holds water inside blood vessels) were included in the resuscitation fluid. In two preliminary studies, a remarkable reduction in mortality was observed in children receiving albumin resuscitation, with under 5% of the children who received albumin dying - whereas conventional treatments are associated with 20-40% mortality rates.

In a paper appearing today in the open access journal PLoS Clinical Trials, the Imperial College-KEMRI-Wellcome Trust research team, which has also been supported by the St Mary's hospital paediatric charity COSMIC (Children of St Mary's Intensive Care), reports a further study. This has confirmed the remarkable effect of albumin in reducing mortality from severe malaria. Eighty-eight critically ill children were enrolled in a trial to receive either albumin or a cheaper synthetic solution. Only 2% of the children receiving albumin died, as opposed to 16% of those receiving the synthetic fluid. Combining the data from all three studies using albumin, a highly significant reduction in mortality to below 5% was found in children treated with albumin, much lower than the usual mortality (in excess of 20%) for those receiving saline or synthetic colloid solutions.

Significance of these findings

The observation that treating critically ill children with malaria using albumin-containing fluids can reduce the mortality rate by over 80% could represent a major breakthrough towards improved treatment of this devastating illness. If the results were confirmed in larger follow-up studies, it would indicate that many thousands of lives could be saved through a relatively simple intervention.

However, as albumin is more expensive than saline-containing fluids, confirmation of these promising findings in large multi-centre trials is required before the treatment could be routinely recommended to hospitals throughout Africa. Funding for such a confirmatory trial is currently being sought by the investigators. If albumin were shown in larger trials to have the same beneficial effect in reducing mortality, an international effort would be required to make this treatment readily available in hospitals across Africa. The progress made by the research team indicates the benefit of Imperial College-KEMRI-Wellcome Trust collaborative research, linking expertise and technology normally only available in developed countries to the problems presented by severely ill patients.

" The observation that treating very sick children with severe malaria with albumin infusion can reduce the mortality rate by up to 80% represents a major breakthrough towards improved treatment of this devastating illness. However, administration of fluid to children critically ill with malaria is contrary to prevailing practice, and albumin is currently not available in most African hospitals. It is absolutely essential that the results are reproduced in larger studies before we advise on any change in practice.

_ The results of this trial have gone some way to answering the question of whether this form of supportive treatment saves lives, and we are now seeking funding for a larger trial involving over 1000 children in Ghana, Gambia and Kenya to confirm these findings in the poorest parts of the world."


News is included on the IvyRose website to inform visitors about current health issues, but not to endorse any particular view or activity. Any views expressed in the article above are not necessarily those of IvyRose Ltd.. Material in this news item was released by the UK-based source listed below on 15 September 2006 and may have been edited (e.g. in style, length, and/or for ease of understanding by our international readers) for inclusion here. For further information, please visit their website.

What does your taste in music say about you ? Leicester University investigates ... - 14 Sep '06

Look past apparent errors and misunderstandings to see only the good in all.