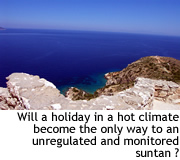 BMA Cymru Wales is deeply concerned about the link between cosmetic sunbed use and the rising incidence of skin cancer in Wales and is suggesting that the National Assembly for Wales, as part of its new powers, passes a bill that would regulate sunbed parlours in Wales and compel local authorities to issue licences regulating cosmetic sunbed premises, also known as sunbed parlours or salons.

“ BMA Cymru Wales does not recommend tanning devices for cosmetic purposes because their use may result in acute and chronic health effects on the skin and eye.We therefore believe that there should be a thorough regulation of sunbed operators. Tighter controls could have a positive impact on skin cancer prevention efforts.
_ We have been concerned for some time about rising sunbed use and the effect this may have on levels of skin cancer. With its new powers to create new Welsh law, the National Assembly now has the opportunity to make a difference on this issue and steal a march on the UK government.
_ Even moderate use of sunbeds, for example once a month, is enough to double an individual’s annual dose of UV radiation."

Sunbed use is increasing in Wales. As the record-breaking July 2006 heat fades from memory, more and more people will make appointments at sunbed parlours to maintain their tan. Some users argue that, at least for reasons of civil liberties, availability of facilities for use by mentally competent adults should not be restricted or monitored in any way. Doubtless the many business owners who have already invested in this technology for use by their clients would agree.

“ I am particularly concerned by evidence that children are using sunbeds as they are especially sensitive to ultraviolet light. Just one day of burning as a child increases the risk of getting skin cancer as an adult," added Dr Lewis.

“ We are seeing more and more younger patients with skin cancer, particularly young women who are frequent sun bed users. In the past some types of skin cancer were only seen in elderly people, particularly outdoor workers, but now it is commonplace to see patients in their 40’s and even younger with these tumours. Dermatologists would never recommend sunbeds for tanning, it's much safer to stay pale and interesting or to use a false tan, or in other words fake it don't bake it.”

The burns unit at Morriston Hospital has also treated patients with burns caused by tanning sessions.

" We believe that a bill on this subject would have a significant effect on the incidents of skin cancer in Wales," added Dr Lewis.
" This is a public health issue and an issue on which the National Assembly could make a difference."

This rings alarm bells among the increasing portion of the UK population disturbed by the encroaching "nanny state" in Britain. Those who argue in favour of this regulation say that by providing health risk information, the bill would aim to ensure adults are equipped to make informed choices about the risks of sunbed use. The conditions of licensing would require staff to be on premises, which would help to prevent over-exposure to ultraviolet light, especially by those who are more sensitive such as users with fair skins. The hope is that the bill would also reduce the number of burns and accidents currently attributed to the misuse of unsupervised equipment and would drive up standards amongst operators.

Ultimately, one must ask if regulation would be effective in reducing adverse health conditions, or if it would just damage businesses active in the beauty / leisure sectors. In this case, the debate is likely to raise the public profile of this subject area - highlighting concerns about sunbeds. However, in many cases it is possible, and would probably also be reasonably convenient, for residents of Wales to simply use sunbeds in England, or even to buy the equipment for home use - thereby receiving no protection of regular equipment checks at all. This may be another case of medics arguing politics rather than medicine, and so perhaps making a situation worse by sending the disapproved-of activity "underground" - not illegal, exactly, but increasingly practiced in private (e.g. at home), at facilities outside of Wales (shame about the local businesses then), or worst of all, on overseas beaches where the bill could result in a greater temptation to extreme tanning or burning "while the opportunity is there".

Education, but not regulation of premises or users, may be the best possible approach - and the mere discussion of this bill is already achieving exactly that.


News is included on the IvyRose website to inform visitors about current health issues, but not to endorse any particular view or activity. Any views expressed in the article above are not necessarily those of IvyRose Ltd.. Material in this news item was released by the UK-based source listed below on 01 September 2006 and may have been edited (e.g. in style, length, and/or for ease of understanding by our international readers) for inclusion here. For further information, please visit their website.