Saving the snow leopard with stem cells has been receiving research attention at Monash University (Australia) where scientists have, for the first time, produced embryonic stem-like cells from the tissue of an adult leopard. As a result the survival of the endangered snow leopard is looking more promising. 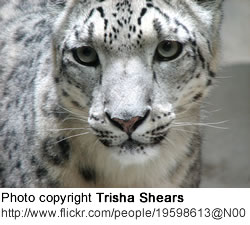 Induced pluripotent stem (iPS) cells, which share many of the useful properties of embryonic stem cells, have been generated from a member of the cat family. This breakthrough raises the possibility of cryopreservation of genetic material for future cloning and other assisted reproduction techniques.

The study, published in Theriogenology, is part of the PhD project of Rajneesh Verma, supervised by Dr Paul Verma, both from the Monash Institute of Medical Research (MIMR). Associate Professor Peter Temple-Smith of Monash University's Department of Obstetrics and Gynaecology and Professor Michael Holland of the University of Queensland also collaborated.

Dr Verma said the breakthrough was significant due to the difficulty of obtaining reproductive cells, or gametes, even from animals in captivity.

" There is a lot of interest in cryopreservation of tissue from endangered species, but for this to be useful for conservation, both sperm and an egg are required.
_ The power of stem cells is that they can differentiate into all the cell types in the body. This means, they have the potential to become gametes. In fact, mouse iPS cells have given rise to entire off-spring, so the possibilities are enormous," Dr Verma said.

Mr Verma said the benefits of the breakthrough for the conservation of cat species, and biodiversity were clear.

" By generating these stem cells, we've taken the first step in creating reproductive cells from adult tissues of an endangered animal. In the future, we aim to harness the potential of the iPS cells and create off-spring. This would help save species from extinction," Mr Verma said.

The snow leopard is a large cat native to the mountain ranges of Central Asia. Their high-altitude habitat and shy nature make accurate population counts difficult, but it is estimated that between 3500 and 7000 snow leopards exist in the wild, with numbers on the decline.

Mr Verma said he became fascinated with large cats during his childhood in India.

" I'm really following my passion in applying my expertise in stem cells to help save these animals. I am applying the same techniques to other members of cat family, including the Bengal tiger, the jaguar and the serval."

News is included on the IvyRose website to inform visitors about current health issues, but not to endorse any particular view or activity. Any views expressed in the article above are not necessarily those of IvyRose Ltd.. Material in this news item was released by the Australian based source listed below on 23 January 2012 and may have been edited (e.g. in style, length, and/or for ease of understanding by our international readers) for inclusion here. For further information, please visit their website.

Research into genetic causes of schizophrenia within families - 17 Jan '12