Success of efforts to combat river blindness leading to complacency

The apparent success of programmes to combat river blindness is leading to complacency, say researchers in a paper in PLoS Medicine today. They argue that the disease cannot be brought fully under control without research into fundamental questions about how it is affected by interventions.

Recent research has revealed that 37 million people are infected with the disease, more than twice the number previously estimated. The researchers, from Imperial College London, warn that the parasitic worms which cause the disease might one day become resistant to ivermectin, the only drug used to control them.

Some communities have been receiving regular treatment for river blindness, which is also known as onchocerciasis, since the late 1980s. However, no one knows for certain when this treatment can safely be stopped, as the adult worms may still be living inside people in areas where infection was previously endemic. It is difficult to monitor the true status of the infection because there is no test that can determine the number of adult worms inside the body. 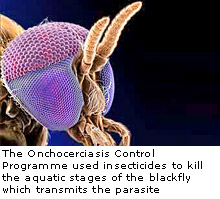 The Onchocerciasis Control Programme in West Africa (OCP), which ended in 2002, saw the disease eliminated in core areas of the region, mainly by using insecticides to kill the aquatic stages of the blackfly which transmits the parasite.

However, other large?scale programmes in Latin America and Africa rely on ivermectin, donated by the pharmaceutical company Merck. Whilst these latter programmes have largely brought morbidity under control, it may be more difficult for them to eliminate the reservoir of infection. Symptoms are caused by embryonic worms or microfilariae, produced by adult worms living inside the body. Ivermectin kills the embryonic worms but not the adults which produce them.

Dr Maria-Gloria Basánez, from Imperial College and lead author on the paper, explained:

" The programmes that have been put in place across the world have been immensely successful in terms of the numbers of people protected, but we mustn't think that river blindness is a disease of the past. We only have one drug available to kill the parasites and if the parasites became resistant to this drug, the progress of the current programmes would be seriously jeopardised."

Dr Basánez argues that there is a need for mathematical modelling and greater epidemiological and genetic surveillance, both to ensure the success of initiatives in Africa and Latin America and to protect the legacy of the Onchocerciasis Control Programme.

" There are still important areas of basic and operational research that need commitment and funding in order to inform control policy rationally and effectively. For example, we have no test to tell us how many worms are living inside people. Once we have begun treatment we don't know for sure when we can safely cease treating the affected populations without the risk of infection returning. River blindness is a neglected disease and we will not be able to claim long-lasting victory if partial achievements become impediments to further research," she added.

The paper was written by researchers from Imperial College London, the University of Leeds and the Institut de Recherche pour le Développement, Paris.


Health News is included on the IvyRose website to inform visitors about current health issues and research, but not to endorse any particular view or activity. Any views expressed in the article above are not necessarily those of IvyRose Ltd.. Material in this news item was released by the source indicated below on 25 September 2006 and may have been edited (e.g. in style, length, and/or for ease of understanding by our international readers) for inclusion here. For further information, please visit their website.

There is no one fixed list or definition of angel or angelic qualities.