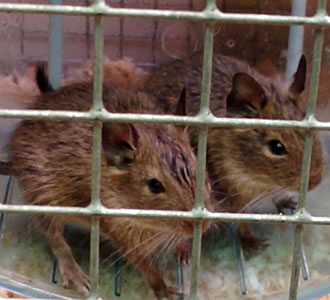 Note: These animals (above) are for illustration purposes only.
They are well cared-for and not used in animal testing.

The above animals are not used in research

The EU ban on animal testing of cosmetic products (planned since 2009) is expected to come into force on 11 March 2013 despite persistent efforts to postpone this important legislation. Animal rights campaigners will hope that effort then turns to enforcement of the ban.

The forthcoming ban is the result of decades of hard work by campaigners for animal welfare who have united under various banners and logos, always with the welfare of animals firmly in mind.

Cruelty Free International has provided a brief summary of some the efforts involved, including:

As a result of their efforts sustained over many years, campaigners are finally looking forward to the imminent end to animal testing for cosmetics in Europe in the form of an anticipated announcement that the import and sale of animal tested cosmetic products and ingredients is to be banned in the EU on 11th March 2013. The anticipated ban will mean that from 11th March onwards, anyone who wishes to sell new cosmetic products and ingredients in the EU must not test them on animals anywhere in the world. The ban affects all cosmetics including toiletries and beauty products from soap to toothpaste.

Some reports have suggested that beauty companies selling products in the EU had hoped or expected the ban to be delayed or derogated, permitting them to continue testing cosmetic products and ingredients on animals until they could find alternative methods. According to Cruelty Free International's website (30 Jan 14), despite rumours of postponement of the ban the new European Commissioner for Health and Consumer Policy, Tonio Borg, confirmed in a recent letter that the ban is to remain in place:

" I believe that the ban should enter into force in March 2013 as Parliament and Council have already decided. I am therefore not planning to propose a postponement or derogation to the ban. This decision also means that we need to step up our efforts in the development, validation and acceptance of alternative methods as well as in the international recognition of these methods. I know that ECEAE has been a valuable and knowledgeable partner in these areas and I count on your future support." -- quotation

This is not just good news for campaigners, but far more importantly, it is good news for the many animals that could otherwise have suffered horribly during whatever period of delay might have applied.

Leaders of campaign groups have responded with positive comments, including Michelle Thew, Chief Executive of Cruelty Free International, who has been quoted as saying:

" This is truly an historic event and the culmination of over 20 years of campaigning. Now we will apply our determination and vision on a global stage to ensure that the rest of the world follows this lead."

Paul McGreevy, International Values Director at The Body Shop paid tribute to customers who have supported the company's campaign against animal testing in cosmetics for many years, while correctly observing that:

" This great achievement in Europe is only the closure of one chapter. The future of beauty must be cruelty free."

While an end to testing cosmentics on animals in Europe and an end to the testing on animals of cosmetics that will subsequently be sold in Europe is a great achievement, there is much more work to be done about countless further animals who are still subjected to (and in some cases bred for the) pain, fear and distress of being used as subjects in laboratories. Sadly, many animals continue to be deliberately mutilated in ways too distressing to describe here by humans in laboratories - in the name of research. People who are concerned about animal welfare will be glad about the EU ban on animal tests for cosmetics, while still disturbed about such acts elsewhere in the world and, of course, about the on-going abuse of many types of animals in medical research laboratories both within the EU and elsewhere.

News is included on the IvyRose website to inform visitors about current health and other issues but not to endorse any particular view or activity. Any views expressed in the article above are not necessarily those of IvyRose Ltd..

Archangel Zadkiel is associated with Memory and with Forgiveness.