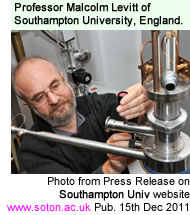 Enhanced MRI scans, producing brighter and more precise images, and potentially allowing the detection of cancerous cells before they cause health problems may result from leading-edge research being carried out at Southampton University (England, UK).

Professor Malcolm Levitt of Southampton University (pictured right), and his colleagues are pursuing research into enhanced nuclear magnetic resonance (NMR). NMR is the physical principle underlying MRI scanning, which is used routinely to detect abnormalities such as tumours. The long term aim is that this research will lead to a range of clinical applications, including the early detection of cancer.

Although NMR signals are inherently very weak methods have been developed recently which lead to substances exhibiting a phenomenon called hyperpolarization, and which give rise to NMR signals that can be more than 100,000 times stronger than normal. The challenge is that this incredible enhancement only lasts a short amount of time - up to one minute in favourable cases.

Research in Southampton has previously demonstrated the existence of quantum states that have very long lifetimes - up to half an hour in the case of the common substance nitrous oxide, often known as laughing gas. This research project involves a combination of the hyperpolarization effect with the long-lived quantum states developed in Southampton. The combination could give the best of both worlds - enormously enhanced NMR signals, which last long enough to perform an MRI scan.

" This could have benefits for MRI Scanning. If you have strong signals, you can detect smaller amounts of substance that are less concentrated. For example, some substances naturally occur in a cell as part of the metabolism process, but occur in greater amounts in cancerous cells. Through this method, we should be able to detect when these substances are present and cells are potentially cancerous, earlier than ever before.
_ Additionally, this method could allow us to detect oxygen levels in cells. When oxygen levels are depleted, this can mean that cells are metabolising more quickly, which can suggest that the cells are cancerous."

New pieces of equipment that will help with this research include a polarizer that will be designed and constructed in Southampton, and which will generate substances exhibiting the hyperpolarization phenomenon. Another new piece of equipment will be a NMR spectrometer equipped to perform small-scale MRI experiments to test new concepts in preparation for performing experiments on a clinical MRI scanner. It is hoped that this research over the next four years will lead to the development of new tools for clinicians to detect metabolic or anatomical abnormalities in the body.


News is included on the IvyRose website to inform visitors about current health issues, but not to endorse any particular view or activity. Any views expressed in the article above are not necessarily those of IvyRose Ltd.. Material in this news item was released by the UK-based source listed below on 15 December 2011 and may have been edited (e.g. in style, length, and/or for ease of understanding by our international readers) for inclusion here. For further information, please visit their website.