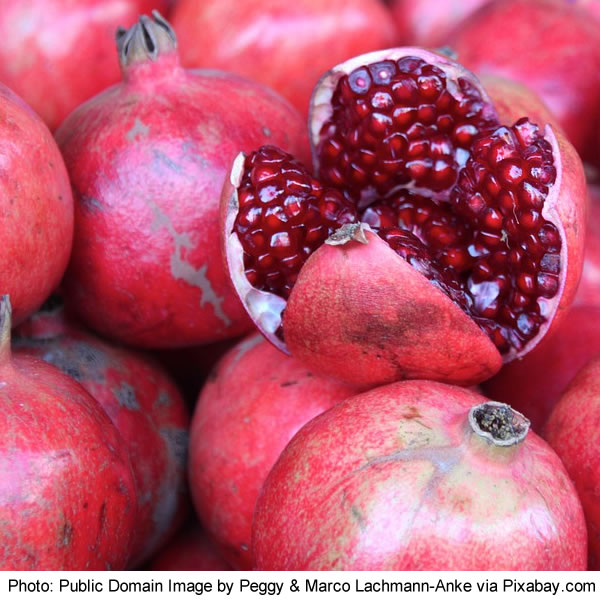 Pomegranate fruit extracts can block enzymes that contribute to osteoarthritis according to a Case Western Reserve University School of Medicine study published in the September 2005 issue of the Journal of Nutrition.

The study looked at the ability of an extract of pomegranate fruit against Interleukin-1b (IL-1b), a pro-inflammatory protein molecule that plays a key role in cartilage degradation in osteoarthritis. Current treatments for osteoarthritis ? which affects 20 million people nationwide, according to the National Institutes of Health ? offer limited effectiveness and do little to slow joint destruction and disease progression.

"This has generated considerable interest in the identification and development of new approaches and reagents to treat and inhibit, if not abolish, the progress of the disease," said Tariq M. Haqqi, Ph.D., professor of medicine at Case.
"Arthritis is one of the foremost diseases for which patients seek herbal or traditional medicine treatments. However, all the extracts and herbs have not yet been scientifically evaluated for their efficacy and safety. Indeed, some of them may even interfere with the current treatments," Haqqi said. "Therefore, careful use of supplements and herbal medicines during early stages of disease or treatment may be made to limit the disease progression."

Plant-based flavonoids found in fruits, leaves and vegetables have attracted a lot of attention for their beneficial health effects in various diseases. Pomegranate, in particular, has been found to possess antioxidant and anti-inflammatory properties that have potential therapeutic benefits in a variety of diseases. The case study demonstrated for the first time the ability of pomegranate fruit extracts to slow the deterioration of human cartilage.

" It has been revered through the ages for its medicinal properties," said Haqqi.
" Studies in animal models of cancer suggest that pomegranate fruit extract consumption may be anticarcinogenic, whereas studies in mice and humans indicate that it may also have a potential therapeutic and chemopreventive adjuvant effect in cardiovascular disorders."

A bonus with the native Persian fruit is that its antioxidant constituents are rapidly absorbed by the body and are non-toxic.

Using tissue samples of human cartilage affected by osteoarthritis, researchers added a water extract of pomegranate fruit to the culture using a well-established in vitro model. The findings showed a new activity for pomegranate fruit extract ? namely cartilage protection ? in addition to its previously discovered antioxidant and anti-inflammatory properties.

The IL-1b protein molecules create an overproduction of inflammatory molecules including matrix metalloproteases (MMP), which are tightly regulated enzymes necessary for tissue remodeling. When overproduced in a disease state, such as osteoarthritis, they degrade the cartilage resulting in joint damage and destruction.

"This suggests that consumption of pomegranate fruit extract may help in protecting cartilage from the effects of IL-1b by suppressing cartilage degradation in OA," Haqqi said.

More studies are needed to determine the absorption rate of pomegranate fruit extracts in the joints. Future plans include animal model studies in osteoarthritis to determine whether the fruit extract promotes cartilage repair, and whether it can also be effective in treating rheumatoid arthritis.

News is included to provide information about current issues but not to endorse any particular view, activity or product. Any opinions expressed in this article are not necessarily those of IvyRose Ltd.. At least some of the material on this page was released by the source/s indicated below on or about 6th September 2005.This article has been prepared by IvyRose using information and quotations that may also be from various other sources as well as any further comments, explanations and images credited individually.