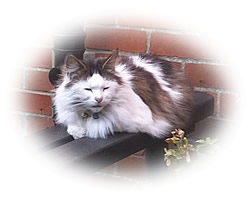 This isn't a picture of Thomas, but another charming cat.

Just a nice story about a cat who went missing and was eventually re-united with his family.

UK Animal charity the RSPCA has recently released this cat story with a happy-ending, which we're pleased to include here.

Malcolm Lucas, from Newcastle in the north-east of England, was surprised when he looked on the RSPCA's rehoming website http://www.rspca-newcastle.org.uk and saw a photo of a white cat called Sparky, who looked exactly like his own cat, Thomas, who had been missing for four years.

Mr Lucas immediately called the re-homing co-ordinator for the RSPCA Newcastle and North Northumberland branch. Thanks to several identifying features (such as a crooked tail and a scar in his ear), the RSPCA staff were fairly certain "Sparky" was really Thomas and invited the Lucas family to come and see him.

When the family arrived and entered area where the cats were being looked-after, "Sparky" immediately responded when they called out "Thomas‟ and he ran straight over to them.

“ We had decided to rehome a cat after losing a pet, so we looked on the RSPCA‟s rehoming website for the Newcastle area. That was when we saw a picture of a white cat, and my wife Anita said: "That‟s Thomas! I know it‟s Thomas! ", so we contacted the RSPCA.
_ We are over the moon to have him back; even our 10 year-old cat Bobby welcomed him back and shared his dinner with Thomas.
_ We had thought Thomas was dead, so we never expected to find him again after so long and cannot thank the RSPCA enough,” he added.

Thomas had been picked up by an RSPCA animal welfare officer in August 2010 after the charity received several calls from concerned members of the public who had seen a white cat - which appeared to be a stray - limping and covered in oil in the Newcastle area. The RSPCA treated the cat for a leg injury and named him "Sparky". As he was not microchipped he was made available for rehoming at the Chartis Boarding Kennels in Hazelrigg and advertised on the charity‟s rehoming website. However, "Sparky" did not find a home quickly because he was quite shy around people and could sometimes appear a little aggressive.

“ I was flabbergasted when Mr Lucas called and said that he thought Sparky might be his cat, who had been missing for four years!
_It has been such a pleasure to see a much-loved family pet reunited with his owners and in this day and age, when we hear so much about animal cruelty, it is great to be involved in such a happy story.”

The RSPCA added that while "Sparky" had a lucky break there are many thousands of cats in RSPCA centres across the country that are not so fortunate. That is why the animal welfare charity recommends that owners should have their pets microchipped to help ensure a reunion should they be lost or stolen. (Microchipping places a small chip, the size of a grain of rice, under the skin which stores an owner‟s contact details which are revealed by a special scanner widely used by dog wardens and animal welfare organisations.)

The RSPCA is a charity and relies solely on donations from the public to keep running. If you would like to help, log onto www.rspca.org.uk. Thank-you.


News is included on the IvyRose website to inform visitors about current health, humanitarian and animal-related subjects, but not to endorse any particular view or activity. Any views expressed in the article above are not necessarily those of IvyRose Ltd.. Material in this news item was released by the the RSPCA on 24 January 2011 and may have been edited (e.g. in style, length, and/or for ease of understanding by our international readers) for inclusion here. For further information, please visit their website. A link is included below.

Depictions of human-like winged-beings have been discovered throughout the ancient world.