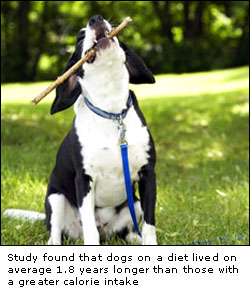 Bugs in the gut are known as gut microbes and they live symbiotically in human and animal bodies, playing an important role in metabolism. Abnormalities in some types of gut microbes have recently been linked to diseases such as diabetes and obesity.

Research published recently in the Journal of Proteome Research was based on a study in which 24 dogs were paired, with one dog in each pair given 25% less food than the other. Those with a restricted intake of calories lived, on average, about 1.8 years longer than those with a greater intake and they had fewer problems with diseases such as diabetes and osteoarthritis, plus an older median age for onset of late-life diseases.

The researchers, from Imperial College London, Nestlé Research Center (NRC) and Nestlé-Purina, found long-term differences in the metabolism of the dietary-restricted and non-dietary-restricted dogs. Metabolic profile plays a key role in determining animals' response to illness and their susceptibility to disease.

" This fascinating study was primarily focused on trying to find optimised nutritional regimes to keep pet animals such as dogs healthy and as long-lived as possible. However these types of life-long studies can help us understand human diseases and ageing as well, and that is the added bonus of being able to do long-term non-invasive metabolic monitoring."

The researchers suggest that part of the healthier metabolic profiles of dogs on a restricted diet is related to their changed gut microbial activity, which in turn contributes to their generally improved health and longer lifespan. However, they also found that the overall effects of ageing on restricted and non-restricted animals exerted a greater effect on the metabolic profile than dietary restriction. This in itself is interesting as the lifelong metabolic trajectories of large animals had never been studied in this detail before and such information might be of relevance to ageing humans and their diseases. The team believes that one important outcome of this work will be the ability to improve the design of products' nutritional properties that mimic the health benefits of dietary restriction in pet dogs.

News is included on the IvyRose website to inform visitors about current health issues, but not to endorse any particular view or activity. The views stated in the article above are not necessarily those of IvyRose Ltd.. Material in this news item was released by Imperial College London (UK) on 12 April 2007 and may have been edited (e.g. in style, length, and/or for ease of understanding by our international readers) for inclusion here. For further information, please visit their website using the link below.

The second sphere of angels includes the Virtues. It is said that they can suspend laws of nature to work miracles on earth.