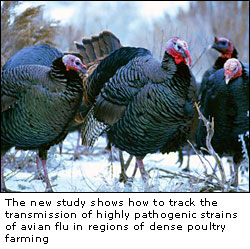 A new way of understanding how highly pathogenic avian influenza (HPAI) spreads among farm birds is published recently (4th April 2007) in PLoS ONE. The study could help analyse the success of different control measures in the event of future outbreaks.

The study, carried out by mathematical modellers from Imperial College London and the London School of Hygiene and Tropical Medicine, focuses on how H7N3, H7N7 and H7N1 strains of the virus were transmitted between different farms in three recent outbreaks.

The scientists used these case studies to devise a numerical measure for how fast the virus spreads, giving the team an important insight into the overall transmissibility of the virus. This can be used to determine whether an outbreak will turn into a self-sustaining epidemic, in which the virus spreads from each infected farm to at least one other farm. The team hopes that their method, which can be used to assess the effectiveness of control measures used to counter any outbreak, will be useful for future planning to stop the transmission of highly pathogenic avian influenza between birds.

Focusing on outbreaks in Italy, the Netherlands and Canada in recent years, the researchers tracked the rate of the virus' transmission at different stages of each outbreak – both before and after measures were brought in to control it. All of the investigated outbreaks occurred in extremely dense poultry farming areas, which increases the chances of transmission and therefore poses particular problems for control. Their findings showed that although the spread of the disease between farms was slowed by the introduction of control measures such as enhanced bio-security, movement restrictions and culling on infected farms, the rate of transmissibility remained close to the threshold point at which the outbreak would become a self-sustaining epidemic.

" Our analyses suggest that in the event of an outbreak of highly pathogenic avian flu in a very dense poultry farming area, additional measures may be needed in order to halt the epidemic. In the case studies we looked at we found that pre-emptive culling and de-population of nearby at-risk areas succeeded in containing the outbreak, where other less drastic measures had failed."

In order to analyse the transmissibility of HPAI the researchers estimated the farm-to-farm 'reproductive number' of the virus. The reproductive number is a measurement of how many farms an affected farm infects during an outbreak.

" If, on average, at any point in time, each infected farm infects more than one further farm, the epidemic will continue. Therefore, what you’re ideally looking for when fighting an outbreak of highly pathogenic bird flu is a reproductive number of less than one.

_ We found in our case studies that the average reproductive number, prior to controls, was between 1.1 and 2.4. Although this average did fall when standard measures were introduced, it remained close to the threshold value of 1. Therefore, stronger action may be necessary to ensure the disease is eradicated."

Dr Garske highlighted the importance of these kind of mathematical analyses, adding:

" A lot of people are concerned about what might happen if a strain of avian flu crosses the species barrier and becomes easily transmissible between humans. The best way to stop this happening is to control bird flu in poultry, as these are in close contact with humans.

_ Our study uses a very simple method of inferring the farm-to-farm reproductive number, which uses minimal amounts of data from an outbreak. Therefore it might be useful in assessing the effectiveness of control measures in areas where data is scarce, such as South-East Asia, where currently the strain H5N1 gives cause for concern."

The researchers' case studies focused on outbreaks of highly pathogenic H7N3, H7N7 and H7N1 strains of avian flu. All highly pathogenic avian flu strains, including the widely-known H5N1 strain, are similar in their effect in poultry, in that they tend to spread rapidly between individual birds and cause mortality of up to 100% in infected flocks.

News is included on the IvyRose website to inform visitors about current health issues, but not to endorse any particular view or activity. The views stated in the article above are not necessarily those of IvyRose Ltd.. Material in this news item was released by Imperial College London (UK) on 4 April 2007 and may have been edited (e.g. in style, length, and/or for ease of understanding by our international readers) for inclusion here. For further information, please visit their website using the link below.