Two enzymes in meningitis bacteria which prevent the body from successfully fighting off the disease, and make the infection extremely virulent, have been identified in new research published today.

The study found that the two enzymes - which have distinct functions - work together to hamper the body's efforts to fight off the disease. Together they repair damage done to the meningitis bacteria's DNA by the body's white blood cells, which are sent to fight the infection.

Understanding the part these enzymes play in the process that enables the bacteria to elude the body's natural defences could eventually help scientists develop novel new treatments for meningitis and the septicaemia it can cause. Both are extremely serious conditions with a high mortality rate, which take hold quickly and are difficult to treat - sometimes resulting in extreme measures such as limb amputation.

When the meningitis bacteria enter the bloodstream, the body's natural defences send white blood cells to fight the infection. They ingest the bacteria and subject them to oxidative stress. Oxidative stress damages the base chemical compounds of the bacteria's DNA. This should lead to cell death and the defeat of the bacteria. However, the virulent meningitis bacteria are able to repair this harmful damage and are therefore unaffected by the body's defences. 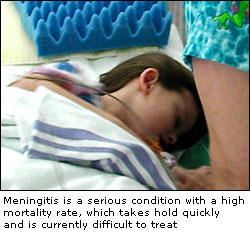 The research team found that the two enzymes essential to the bacteria's repair mechanism are AP endonuclease and 3'-phosphodiesterase. Contrary to the scientists' expectations, these two enzymes carry out separate functions in the DNA repair process.

" Scientists have long understood that the secret of meningitis' virulence lies in its ability to rearrange its DNA and thus change its external appearance to the body's immune system. Significantly our research has now demonstrated that the ability of meningitis to repair its DNA is important for its ability to survive attack from the body's immune system. This work provides an insight into the precise roles of two enzymes in mending DNA and gives us a greater understanding than ever before into why these infections are so hard for the body to fight.

_ We have also discovered that this novel combination of enzymes is present in a wide variety of bacteria and that it has a direct impact on the infectivity of human pathogens." 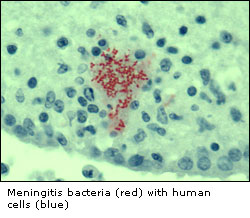 " The wide importance of DNA repair to the viability of all organisms is well established. However, for the first time this research shows an important role for DNA repair in meningitides fighting off the attack of the body's immune system.

_ We have examined two enzymes from a family that are known to cut the DNA during its repair. To our surprise we discovered that in the meningitis bacteria, one of the enzymes does not cut the DNA. Instead, it removes damaged DNA ends that prevent the DNA from being remade during the repair process. This has an important impact for our understanding of the precise pathways of DNA repair and the significance of the two separate functionalities that act in different DNA repair pathways within the pathogen."

" After realising that the two enzymes had distinct roles repairing different types of DNA damage, we were able show the pathogen can 'fend off' different types of DNA damage while in the bloodstream. In theory, finding some way of disabling these enzymes would render the bacteria unable to repair itself, and therefore vulnerable to attack and defeat by the body's immune system."

News is included on the IvyRose website to inform visitors about current health issues, but not to endorse any particular view or activity. The views stated in the article above are not necessarily those of IvyRose Ltd.. Material in this news item was released by Imperial College, London on 23 February 2007 and may have been edited (e.g. in style, length, and/or for ease of understanding by our international readers) for inclusion here. For further information, please visit their website using the link below.