How Many Bones in the Human Body ?

How many bones in the human body ? is a common question and required knowledge of students taking many courses in subjects such as human biology, human anatomy & physiology and health science subjects such as nursing and various therapies.

There are 206 named bones a normal, complete, adult human skeleton.

However, individual people / skeletons can have more than 206 bones including various small un-named bones that have formed, typically in high-friction areas of the body.

Bones of the human body can be classified (i.e. grouped or described) as the axial skeleton and the appendicular skeleton.

It might be easier to learn the names of the bones of the human skeleton in these two groups than to try to remember one list of 206 human bones.

The tables above indicate that:

Sesamoid bones and sutural bones are mentioned on the page about the different types of bones in the human skeleton.

Apart from the patellae (also known as 'kneecaps'), which are the only named sesamoid bones in the human body, the number and location of sesamoid and sutural bones in the skeleton varies considerably from person to person. It may also change over a person's lifetime e.g. if someone changes from having a sedentary lifestyle to one invloving much manual labour and, as a result, develops additional sesamoid bones in his hands.

So, how to answer the exam question: How many bones are in the human body ?

Take into account the maximum number of marks available. If only one mark is available for that part of the question, the expected answer may be short and simple, e.g. "206 named bones".

There is no need to name or list all the bones or to label them on a diagram unless asked to do so.

In the cases of longer questions e.g. including several parts and with more marks available, credit may be given for distinguishing between named and un-named bones and explaining that the minimum number of bones in the human body is 206, which is the total number of named bones.

This is the end of this page about How many bones are in the human body ?

See also the structure and functions of bones, the human skeleton, types of bones, cranial and facial bones, bones of the feet and hands, bone markings and skeletal disorders. 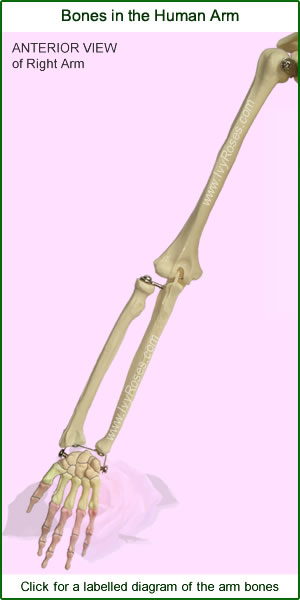 There are accounts of people accompanied by an Angel through an area considered dangerous yet finding themselves alone when the danger was past.