Significant breakthrough in the understanding of embryonic stem cells from Trinity College, Dublin

A significant breakthrough in the understanding of embryonic stem cells has been made by scientists from the Smurfit Institute of Genetics at Trinity College Dublin. The research group led by Dr Adrian Bracken has recently published their findings in the journal Nature Structural & Molecular Biology.

This recent research describes the process by which genes that are 'on' in embryonic stem cells are switched 'off'.

This process is essential in order to convert embryonic stem cells into different cell types such as neurons, blood or heart cells and therefore represents an important breakthrough in the area of regenerative medicine.

The research includes both embryonic stem cell research and epigenetics. Embryonic stem cell research is focused on a particular type of cell that is capable of generating the various tissues in the body e.g. muscle, heart or brain. It is of particular interest for its potential for regenerating diseased tissues and organs and for the treatment of a various conditions such as Parkinson's disease, diabetes and spinal cord injury. 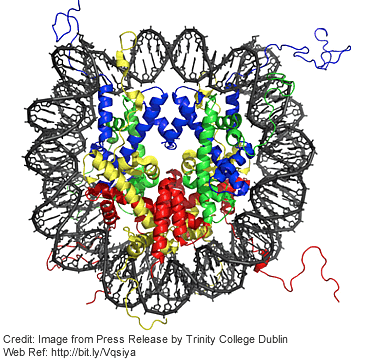 Above: DNA wrapped around a nucleosome. Changes in the 3D stucture of DNA are important for turning genes on and off.

Above: DNA wrapped around a nucleosome.

Epigenetics explains how cells in the human body with exactly the same genes can have such different functionality.

For example, a neuron and a muscle cell look and act very differently, yet contain exactly the same genes. The study of epigenetics has releaved that every type of cell has its own unique pattern of genes that are either switched 'on' or 'off'. Different types of cells arise due to these differences.

The latest research explores the role of a protein termed a 'Polycomb group protein' called PHF19 in mouse embryonic stem cells. Gerard Brien, the lead author on the paper showed that without PHF19, embryonic stem cells are incapable of generating specialised cells such as those of the heart, lung or brain. Then he also showed that PHF19 plays a critical role in switching the embryonic stem cell genes from an 'on' to an 'off' state during conversion into specialised cells. PHF19 does this by reading an 'epigenetic mark' called H3K36me3, which is only found on genes that are 'on'. It then recruits additional 'Polycomb' and other proteins, which replace H3K36me3 with another mark, H3K27me3, that is found on genes that are 'off'.

" This discovery about PHF19 is an important step forward in our understanding of how stem cells specialise. In addition to its relevance in regenerative medicine, it may also have implications in future cancer therapies. We are also studying a related 'Polycomb group protein' called EZH2, which is mutated in lymphoma, a type of blood cancer. Several new drugs have been developed to target EZH2 and treat these patients. Our new results suggest that these patients could also be treated by inhibitors of PHF19. This ongoing work is supported by funding from Science Foundation Ireland".

News is included on the IvyRose website to inform visitors about current health issues, but not to endorse any particular view or activity. Any views expressed in the article above are not necessarily those of IvyRose Ltd.. Material in this news item was released by the Irish source listed below on 5 December 2012 and may have been edited (e.g. in style, length, and/or for ease of understanding by our international readers) for inclusion here.