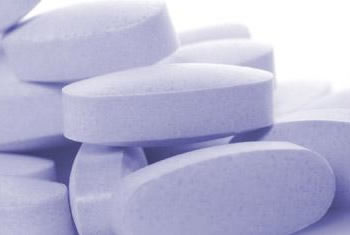 Recent research conducted at Leeds University (England) indicates that a regular dose of aspirin reduces the long-term risk of cancer in people with a family history of the disease by around 60%. The international collaboration, including Leeds University researchers, suggests that the benefits only become obvious several years after taking the aspirin.

Evidence of the benefits of aspirin has been accumulating for over 20 years but these are the first results from a randomised controlled trial assessing the effect of aspirin on cancer. Late last year an analysis of people who had taken part in the early aspirin trials to prevent heart attacks and strokes showed that in subsequent years they developed fewer cancers. The missing piece of the jigsaw was a randomised trial specifically looking at its effect on cancer.

" What we have finally shown is that aspirin has a major preventative effect on cancer but this doesn't become apparent until years later."

Professor Tim Bishop from the University of Leeds, whose team was responsible for the statistical analysis, said:

" What surprised us was that there was no difference in the number of people developing polyps which are thought to be the precursors of cancer. But, many fewer patients who had been taking aspirin years before went on to develop cancers."

" This beneficial effect years later makes sense of all the observational studies - previous randomised trials have not been allowed to run for long enough," he added.

The study involved scientists and clinicians from 43 centres in 16 countries followed nearly 1,000 patients, in some cases for over 10 years. It has been overseen by Newcastle Hospitals NHS Foundation Trust (England, UK) and funded by the UK Medical Research Council, Cancer Research UK, the European Union and Bayer Pharma. The research focused on people with Lynch syndrome, an inherited genetic disorder which affects genes responsible for detecting and repairing damage in the DNA. Approximately half of these people develop cancer, mainly in the bowel and womb.

Information about the research study:

Between 1999 and 2005 a total 861 people began either taking two aspirins (600 mg) every day for two years, or a placebo. At the end of the treatment stage in 2007 there was no difference between those who had taken aspirin and those who had not. However, the study team anticipated a longer term effect and designed the study for continued follow-up.

By 2010 there had been 19 new colorectal cancers among those who had received aspirin and 34 among those on placebo. The incidence of cancer among the group who had taken aspirin had halved - and the effect began to be seen five years after patients starting taking the aspirin.

Further analysis focused on the patients who took aspirin for at least two years according to the original design (60% of the total). In this case the effects of aspirin were even more pronounced: a 63% reduced incidence of colorectal cancer was observed with 23 bowel cancers in the placebo group but only 10 in the aspirin group. Considering all cancers related to Lynch syndrome, including cancer of the endometrium or womb, almost 30% of the patients taking the placebo had developed a cancer compared to around 15% of those taking the aspirin.

" We have succeeded in showing the benefits of aspirin because we had a lot of long term data and because Lynch syndrome is associated with rapid development of cancer. It has also demonstrated how our research community and families with inherited forms of cancer can work together to answer questions important for the whole population.

" Before anyone begins to take aspirin on a regular basis they should consult their doctor as aspirin is known to bring with it a risk of stomach complaints including ulcers," advised Sir John. "However, if there is a strong family history of cancer then people may want to weigh up the cost-benefits particularly as these days drugs which block acid production in the stomach are available over the counter."

" Bowel cancer is the second commonest cause of cancer death in the UK, being responsible for 16,000 deaths a year. This landmark study provides the clearest evidence yet that aspirin can help protect against development of this disease. As we learn more about the underlying mechanism of this anti-tumour effect, we will eventually be able to develop new ways of preventing and treating cancer."

The international team are now preparing a large-scale follow-up trial and want to recruit 3,000 people across the world to test the effect of different doses of aspirin. The trial will compare two aspirin a day with a range of lower doses to see if the protection offered is the same.


News is included on the IvyRose website to inform visitors about current health issues and research, but not to endorse any particular view or activity. Any views expressed iin the article above are not necessarily those of IvyRose Ltd.. Material in this news item was released by the source listed below on 28 October 2011 and may have been edited (e.g. in style, length, and/or for ease of understanding by our international readers) for inclusion here. For further information, please visit the website whose link follows below.

It is sometimes said that Angels and Archangels have their own interests, specialties, and roles. Some books list which Angels have which skills.